Rutherford’s nuclear Model of Atom is based on the gold foil experiment with alpha particles.

A gold foil was selected because it is very thin. The foil was bombarded by alpha particles which are Helium Nucleus.

Most alpha particles pass through the gold foil because most of the atom is hollow.

Very few Alpha particles were bounced back because the nucleus is solid.

He proposed the following Atomic model:

Atom is mostly emplty or hollow except the dense center which is nucleus.

Definition of pH scale in Chemistry 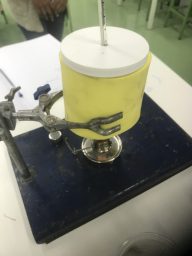 IBDP chemistry Mandatory Experiment on Enthalpy of Combustion of Ethanol